Back for a second run to nail down the data.

Stats for this run: Approximately 250 hours monitoring the telescope. 1250 fit's files exposed. 650 spectrums of the star. The spectrograph maintained a temperature of 60 degrees F +- 0.1 degree for 6 weeks. The spectrograph's optical bench flexed less than 150 microns during the entire time.

After 4 weeks on the star.

Where: Winer Observatory, Sonoita AZ one hour SE of Tucson

Why are we going back?
Since we first detected the tau Boo planet in early 2000 we have been working on constructing our 1.1 meter telescope with the goal of detecting a new extrasolar planet. We are based in Chicago and it is not possible to work on further detections from here due to bad weather and our low elevation. Through the internet we became acquainted with a physicist in Europe who was interested in our data and offered to help publish the detection. We submitted the paper to the Journal of the British Astronomical Association, and had it rejected by an eminent reviewer at Cambridge University, England.

Why did we get rejected?
The rejection was based on a couple things, first our phase was off 180 degrees (my fault, I got the sign convention wrong, I am not a math guy) and second our final orbital period was 3.15 days, off slightly from Marcy's 3.312 days. In the professional astronomy world you have to mathematically prove that your result would not happen by chance 99 out of 100 times. This is known as a three sigma detection, and unfortunately our 3.15 day result with its formal uncertainty, did not fall into that zone. In effect, our data led to the conclusion that 'we are 99% certain that the period is 3.15 days, not 3.312' - which of course does not agree with the previously published work. While it may be obvious from our graphs that we did see the planet, the noise dominated data leads to the professional perspective that "we didn't detect anything".

What happened with the old data?
Originally we had much closer results for the orbital period - these are the data we show on this website. About three quarters of the way through the run in 2000 we processed the data to that point and came out with a 3 sigma detection at 3.41 days. This was great, we declared success and finished up the run taking more data, which were not fully analyzed at the time. Now reworking the complete data set we only come out with the 3.15 day orbit no matter what we do. To practice good science at the professional level you can't just selectively use data, it's all or nothing unless you have good reasons for your actions.

What do we do now?
Getting rejected is part and parcel of professional science. Rejected papers are either reworked, argued or resubmitted to other journals. We have the utmost respect for our reviewer in Cambridge. He is one of the few that doesn't hide behind the shield of anonymity, and even took the time to contact us about a related matter long after the rejection. We are the underdogs here in the pro astronomy world and the Spectrashift team wants to live up to the standards of professional science. We have decided not to resubmit to another journal, and will do whatever (within the conventions of science) it takes to get qualified as a good detection to satisfy our reviewer.

How do we fix the problem?
The only way out of our predicament is DATA, we need more of it so we are going back for a second run.

What's going to be different this time?
In 2000 we had a laundry list of problems - an undersized spectrograph mirror that wasted 20% of the light; bad weather; a half blocked defective grating; and the star was only up four hours a night. This time we have a new grating from Diffraction Products, a 1000x1000 AP8 from Apogee Instruments and new software from Diffraction Limited and DC-3. We are timing the runs so the star is up all night and we are spacing the runs apart to give a longer data span, and hence to get a better value for the orbit. In the first run we ended up with 140 data points, and this time we expect to get 500.

How can you help?
If you have read all of this you are probably interested in amateur science. Give us moral support by checking back here during the run and we will post a link to a chat room that we will monitor every night during the run. All you have to do is login to and say hi so we know you're out there! If you're in the Tucson area and want to stop by send an email and we can set something up!

Got the truck to Tucson chock full of equipment. Spent that night and today setting up everything. Its spring in southern Arizona and believe it or not it's snowing.....

Day Four Monday Rain and clouds during the day, cleared early evening. Got the telescope on a star for the first time this trip. Made multiple adjustments to the guider and pick-off mirror. Still needed to align the star on the science fiber when the clouds and rain came in and we closed up early. Pro astronomer Jonathan Lunine brought the Boy Scouts by today for a tour of the observatory and the spectrograph.

Day Five Tuesday First data! Thin clouds early but we were able to dial in the telescope for the first time. After midnight the clouds cleared and we were able to run until morning. Spectrums look great with more SN in half the exposure time since we updated the spectrograph.

Day Six Wednesday Light clouds early that disappeared by midnight. Photons are flowing smoothly from telescope to spectrograph and the seeing is excellent at 2.5 arc sec. Clouds came back in around 3 am.

Day Seven Thursday Thin clouds all night and finally got completely clouded out around 3 am. So far we have not had a completely clear night this whole run.

Four robotic telescopes all doing science in the moonlight.

Day Eight Friday Clouded out most of the night, got in 6 exposures through thin clouds around 3:00 am

Day Nine Saturday Clouded out again, shot through a thin cloud from 3:30 to 4:30. Our internet connection is bad here and sometimes these updates don't get through.

Day Ten Sunday Finally got a good night in! Conditions were great all night, we were on the star at sunset and shot until 5:30 am. We broke a record with 50 exposures in one night. This compares to the 140 exposures obtained in 2000 over three weeks. We now have more data points for this run than the previous and it could have been much better with good weather.

The system finally performed up to its potential and the exposure times ran as short as 450 seconds (1500 sec in 2000). With the good seeing the AO-7 could be pushed to 11 updates a second and this kept the photons on the fiber. This run we are collecting about 10% more photons per exposure to really lock down the signal to noise. So far the preliminary data is looking much tighter than we expected.

Day Eleven Monday The night is looking good so far, the photon counts per second are a little less so no records tonight.

Day Thirteen Wednesday Seeing was sub-par tonight and it took effort to keep the exposure times right and the star tracking on the right pixel. Another 40 exposures for the nights work. I am extending my stay until Monday to make up for the lost days.

Day Fourteen Thursday Good night tonight, skies were transparent but the seeing was only so, so. Worked through 40 exposures until the sun came up.

Day Fifteen Friday Clouded out most of the night. Got a couple exposures in through holes in the clouds. Sunday night will be the last day of this run. We have over 260 good data points and the preliminary orbit data is looking good.

Day Sixteen Saturday Clouds through the night, was able to track the star and shoot through the clouds with some success.

Last Day Sunday Clear night that had variable seeing. Shot successfully through the night and was finally clouded out around 3:00 am.

In total we obtained 300+ radial velocity measurements. We are still missing some phase coverage that we need to really solidify the period. The weather was the biggest hold back, the systems all worked well considering we didn't have much time to test them in Chicago.

Big thanks to Mike Schwartz for the loan of the cooler, Robert Crawford for the help on the analysis and Mark and his wife Pat for putting up with us taking over the workshop. We will be back in two weeks for the back half of this run, hopefully the weather will fully cooperate and we will nail this planet down!

1st Week, May 1st to May 6th Near ideal conditions all week with low wind and humidity. Every night has been clear and problem free. We have now processed over the 500 measurements for this set of runs. Our measurements are within .05 of the published orbital period and 60 m/s of the correct amplitude. Internet connection problems are preventing daily updates so we will do what we can to get info up here.

My panoramic view of Airizona.

Friday / Saturday 7th and 8th Great conditions faded and we have been clouded out two nights in a row. Got a few shots through holes in the clouds. 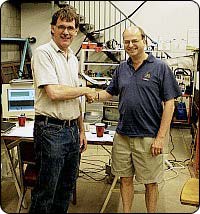 The director of NOAO Dr. Jeremy Mould stopped by to see us in action.

Sunday and Monday 9th and 10th Clouds and wind are preventing further progress, we are taking data in the wind but the scope is bouncing.

Tuesday and Wednesday 11th -12th Windy again on Tuesday but Wednesday was a perfect photometric night. We are now spending half the time shooting 6-7-8th mag stars to get a handle on what kinds of exposure times will be required on the one meter. We are just below 600 obs for this run, quite grueling and not something we want to repeat soon.

Thursday / Friday 13th-14th The run officially ended on Wednesday night. Thursday we switched the camera over to an AP8 loaned to us by Tenagra Observatories. The test was to see how much better a thousand pixel wide spectrum would do against the AP7's 500 pixels. We were clouded out on Friday night and spent Saturday packing up for the trip home.

Wrap Up It is very likely that we now have more data points on this star than all the other exoplanet teams combined. Our final numbers are VERY close for the period and a little weak on the amplitude (which was expected with our level of precision). We are not going to publish the actual numbers until our paper makes it through peer review just to be safe. From the volume of data we can see that the points are spread out in such a way as to suggest there are some things we can do to improve the precision of the system. In general the system worked almost flawlessly the whole run. This was really unexpected since we only tested parts of it back in Chicago before coming out. The weather ranged from snow, to perfect photometric nights.

We would like to thank our hosts Mark and Pat Trueblood of Winer Observatory. Mike Schwartz for the loan of the AP8 and the cooler. Robert Crawford for the data analysis and Mike Fitzpatrick at NOAO for the insight into Fxcor. It was also great to have all the astronomers stop by including Dr Mould.