October 4th 2003
We have purchased a 1.1-meter quartz blank that was manufactured by GE in the 60's as test blanks for the Mayall Solar Telescope at Kitt Peak. It was rejected for imperfections in the casting and ended up in the backyard of amateur astronomer Norm Oberle.

For thirty years it waited to be his retirement project, but sadly, he died of cancer before he could start it. We have picked up the challenge and intend to turn this blank into a fast cassegrain telescope. Our optician has come up with an all-spherical design that uses an 18" secondary and two corrector lenses. This design should produce 50-micron FWHM star images across the field of the CCD. It also offers the advantage of a short tube length of about five feet, which is a big bonus for this size mirror.

The all-spherical design allows us to bypass the long tedious process of parabolizing the mirror, which can take ten times longer than the initial spherical figure.

May 2003
The design has evolved from an all spherical to an ellipsoid primary with spherical secondary and corrector lenses. This design was chosen in order to minimize the size of the secondary down to 10 inches. We are currently finished with the primary polishing and are having null lenses fabricated for the final figure. Once the null lenses are fitted to the interferometer we should be very close to completing the final figure and finishing the mirror.

We have started the initial design of the mount and the non traditional concept is sparking much debate among the team members. It is loosely based on the Sofia airplane mounted telescope and utilizes an air bearing at the center of gravity to support the entire load. 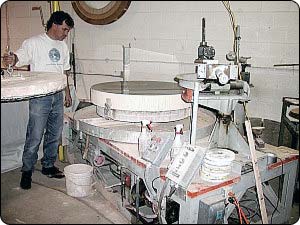 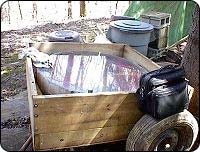 The blank as it sat in the backyard of Norm Oberle. 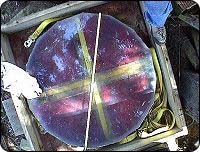 The blank was already polished on both sides. 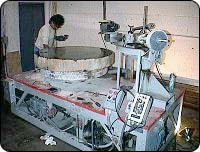 The grinder was purchased as government surplus and is a 60's vintage machine in excellent working condition. 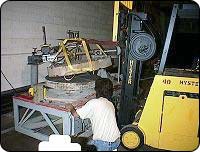 Here is a picture of us loading the 900 lb blank on the grinder.

The optical layout - all components are spherical.

An instrumentation tower was fabricated to hold the optical test equipment at the radius of curvature.

A hole was cut in the roof and the tower mounted to the structural beam.

A hand grinder was mounted to an aluminum tube and its far end attached to a pivot at the radius of curvature. The blank was rotated while a diamond wheel cut into the blank. This method removed well over 1000 cubic inches of glass in two days and brought the blank to within .020" of the final curvature.

Close-up of blank partially ground with the diamond wheel.

Steel support frame set into the mold for the plaster grinding tool.

After four days of grinding with the 37" tool, the blank was spherical with slightly dull finish. The next step is creating a polishing tool and putting on the final finish. The optical design has changed and we will be polishing an ellipsoid into the F2.5 curve. A reflected point source test at the radius of curvature shows no problems with the blank. 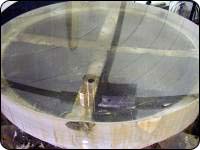 After many months of delays due to the recession and 9-11 we finally have a smooth polish on the mirror. We are now ready to test the mirror and start working on the final figure. Note the strong curvature in the wall reflection. It takes 5 gallons of water to fill the mirror to level so we removed that much glass. 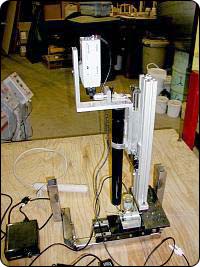 The past three months have been spent building and debugging an interferometer. Shown here is the Palmer/Shack design that is simple and effective. The vertical black tube is a HeNe laser that directs the beam into a 100x microscope objective. The microscope objective is focused on a 10 micron pinhole that is permanently glued in place sandwiched between the objective and a beam splitter. The result is an objective that has the beam splitter cube hanging off of it. The laser light cone coming from the pin hole gets reflected out of the splitter down to the mirror. A small percent gets reflected off the uncoated mirror and back to the cube. At the same time a similar amount of laser light gets internally reflected in the cube and exits out the top with the reflected light from the mirror. The face of the beam splitter is polished to 1/20th wave flatness and the combined reflected beams interfere and demonstrate the classic fringe pattern when viewed from directly behind. The video camera lens is right up against the beam splitter. Click on thumbnail to see a larger image with all the parts labeled. 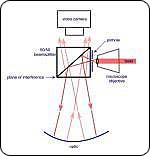 Click on the image at left to see the optical layout of the Palmer/Shack Interferometer. 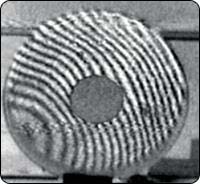 This is an example of a fringe pattern on a 12" polished blank. 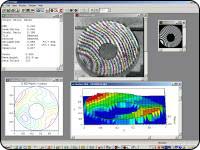 simple digital picture of the fringes can be imported into MaximDL's Quick Fringe software. This spectacular software automatically detects the fringes and gives a 3D map of the mirrors wave front. It gives the peak to valley as well as the RMS and Strehl Ratio of the optic. 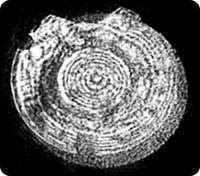 First "fringe light" for the 1 meter showed a high nulled zone about half way out from center. 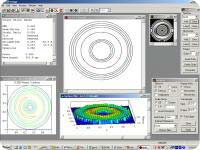 First Quick Fringe analysis of the 1 meter shows it to be out by about 2 waves at this point. We have several additional days of polishing in now and this zone is almost completely gone. We are reworking the video system on the interferometer so we don't have any new tests at this time.

The fringes in the two pictures above were later found to be internal reflections and did not actually represent the mirrors figure. The update below shows the actual data. 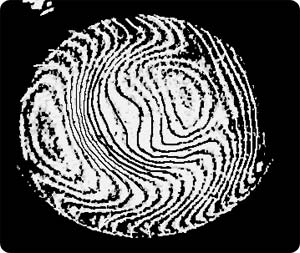 The fringes from mid year 2002 showing the blank out by several waves. 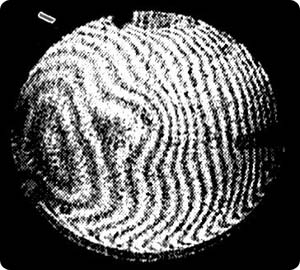 After several months of trial and error we finally worked the mirrors surface into the proper F2 spherical shape. Originally, improper setup of the interferometer created about 50 hours of unnecessary polishing.

After working with several of the polishing tools we successfully came across the right combination of tools and parameters to get a good sphere. This interferogram in Quick Fringe shows that the mirror is now at about 1 wave PV and ¼ wave RMS. 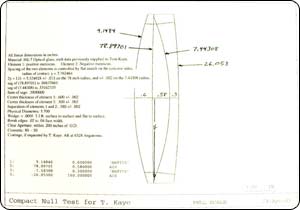 The null lenses are finally here after some extraordinary effort on the part of our sponsor Kreisher Optics. We now have all the pieces we need to finish the mirror. 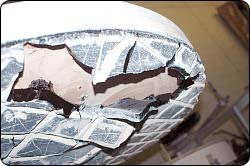 Our largest polishing tool suffered some heat damage this summer when the pitch delaminated from the plaster tool. We hope to finish the final figure with the remaining three tools. 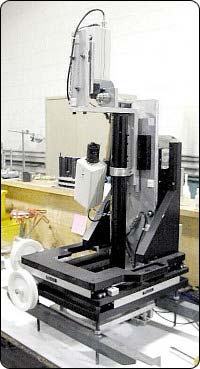 Or rebuilt interferometer is ready for action. The null lenses have been incorporated into the design along with 11 different adjustments. Focus and polarization are now remote controlled. 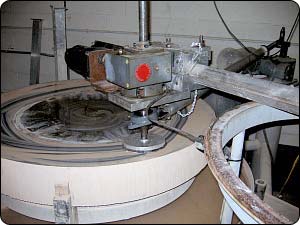 Polishing is NOT fun. We are over 100 hours into removing material and things are just barely under control. We are trying to get fringes all the way across the mirror and we keep screwing things up. At this point we have three major zones and the center is still high by about 20 waves. We do see fringes about 3/4 of the way to the edge so there is hope... 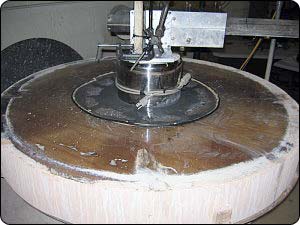 Here we used a stainless cooking pot to bore a 10" hole 80% of the way through the back of the mirror. This was done to relieve stress before final figure.

In the last year we had to take the mirror back to a sphere three times because of a messed up figure. The first 4 months of 2007 were spent full time figuring the mirror before its move to Arizona. In the last attempt, things were close but not perfect and some high spots were taken down by hand. The mirror is currently within 1/2 wave RMS and we don't know if this is good enough or not. Everyone told us an F2 mirror was really hard to figure and they were right!!

The final cut from the mirror side to complete the center hole.
The secondary mirror and corrector lenses have arrived from Tuscon Optical Research. The optical train is now complete.
created & hosted by TechPro