High-precision radial-velocity measurement with a small telescope: Detection of the tau Bootis exoplanet

Accepted for publication in: The Journal of the British Astronomical Association

A four year saga finally comes to a close. When we first embarked on this project we were told unequivocally that precision radial velocity measurements were impossible at the amateur level and required the funding and resources of an institution. We have build the instrument, modified the telescope, sorted out the problems, pushed the envelope and acquired the data. Now officially peer reviewed and accepted for publication, we can say " The Spectrashift Team has detected the exoplanet around Tau Bootis". Now it's time to get on with the business of discovering one!

Abstract: The successful detection is reported of radial-velocity variations due to orbital motion of the substellar companion of the star tau Boötis, from data obtained with a small aperture (0.4-m) telescope and a fibre-fed high resolution spectrograph. Radial velocity observations from observing runs in 2000 and 2004 reveal a periodic variation of 3.30 ± 0.02 d, which is consistent with the previously determined value of 3.3125 ± 0.0002 d. We fit our data to a circular orbit with the known period, and derive a velocity amplitude of 471 ± 10 m s-1 (in agreement with the previously published value of 469 ± 5 m s-1), and determine a time of maximum velocity (Tmax) of HJD 2453113.95 ± 0.01. These observations explore the minimum system requirements for precise radial velocity measurements. 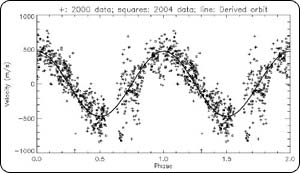