Tenagra and Spectrashift embarked on a collaborative effort to put a low resolution spectrograph on the .81 meter Tenagra II telescope.  The goal was to make this system is one of the first fully automated spectrographs in the world.

As of January 2006 the system is fully functional and debugged. On software command only, the system will automatically slew to the star, correct for offset, acquire the star, activate the AO-7 to move the star to the best fiber, and start the spectrograph camera. During the exposure which can last an hour, the scope is actively guided. The system monitors drift and loss of the the star due to clouds etc. Below is the functional description of the system. 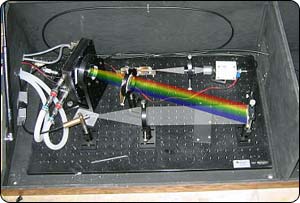 At right the spectrograph is shown with a Photoshop light path overlay. This is pre-final dial in so the optical fiber is not properly aligned.

The optical bench is 2x3 feet and the entire system is hosed in a light proof box with hinged cover. Not shown to the right is a separate compartment for the reference lamp.

Since it was unknown how the system would perform given the design constraints, it was built for best balance between cost and performance. The optics are off the shelf along with the grating. The backlit AP8 gives a 1000 pixel wide spectrum but only about 700 pixels are used effectively due to the small optics. 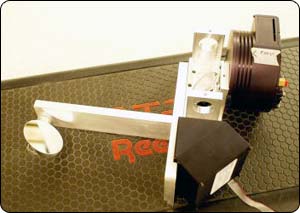 Shown here is the custom Fiber Interface for the Tenagra scope. It bolts into an access port on the side of the scope where the autoguider was originally. It does not interfere with the imaging camera in any way. The pickoff mirror on the left is a couple inches off axis and the star is hopped from the imaging camera to the pickoff mirror. The star image is then reflected off the AO-7 tip/tilt mirror system into a beam splitter that reflects 3% of the light to the guide chip on the ST-7 CCD camera on the far right. Not shown is the fiber mount which fits into the empty hole at the top. The Tenagra scope is unguided which is common for many high performance mounts. The AO-7 tip/tilt mirror allows for precision guiding of the star on the fiber. When the scope drifts by a certain amount, the software "bumps" the scope back while the AO-7 is constantly correcting and keeping the star on the fiber. 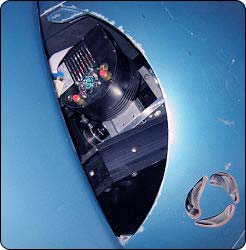 The picture at right shows the fiber interface assembly mounted in the telescope. This telescope was primarily designed for imaging and did not have extra room for additional instruments. The entire ST-7, AO-7 and assembly had to fit within the steel housing at the back of the telescope.